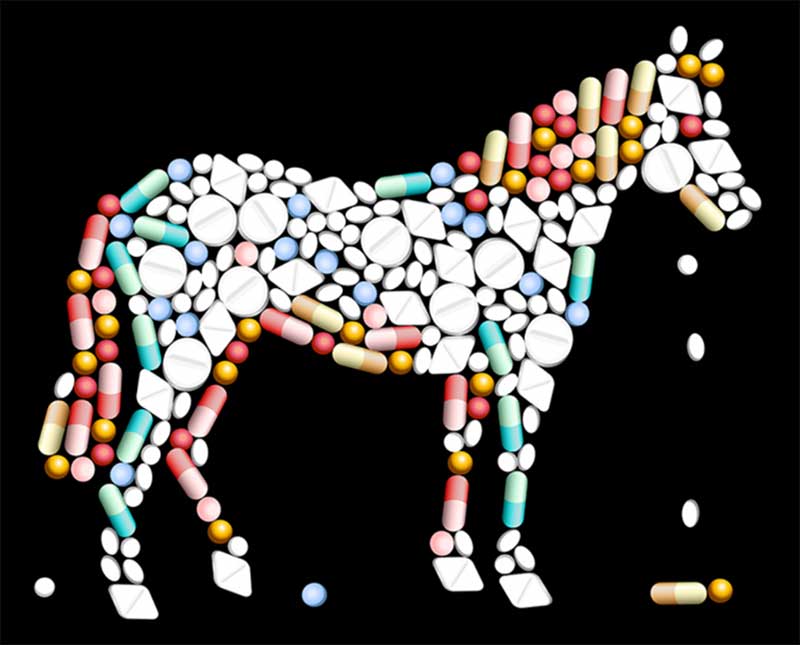 Funnily enough I just got off the phone with a trainer crying the blues about her feed room and how crazy her clients are about feeding multiple supplements. So along with numerous other conversations with trainers it is readily apparent that this problem, if anything, is getting worse. Again, as I finished in the last blog, this is not supposed to scare you but to make you more aware of potential pitfalls of feeding multiple supplements, none of which were necessarily designed to be fed together and on that note we will get into the minerals.

Calcium/Phosphorous: The most important thing about Calcium and Phosphorous is their relationship to each other. The ideal Calcium/Phosphorus ratio for a mature horse is 2 to 1 with a minimum of 1 to 1 and a maximum of 6 to 1. Although an excessive amount of calcium will not normally cause a problem provided there is an adequate amount of phosphorous in the diet, Calcium in excess of 2% of the total diet may be harmful. Symptoms of excess calcium can be bone and cartilage inflammation and a decrease in the absorption of other important minerals. The result of excessive Phosphorous and Calcium deficiency is bone demineralization. There may also be an enlargement  of facial bone structure, lameness and weight loss. As the condition worsens nasal passages may become partially  blocked, teeth may loosen and fall out and limbs will be much more susceptible to fractures.

Cobalt:  There is no confirmed evidence of a toxic level of cobalt in horses in fact there is insufficient research to state with any certainty what the daily requirement should be. Some studies have indicated a prudent maximum to be 10mg per day. NB Iodine, Cobalt and Selenium should be fed in similar amounts.

Copper: There has not been sufficient research into the effects of excessive copper in horses but a safe upper level would be in the range of 4000mg per day. In one case of long term overfeeding to a group of horse that were being fed 2800mg per kg of total diet the horses experienced hepatic and renal failure ultimately leading to multiple deaths after approximately six months of those excessive levels.  NB The amount of copper fed should be at least less than half the amount of iron, manganese and zinc in the diet.

Iodine: An upper safe level of Iodine is 5mg daily per kg of diet. Be particularly aware of horse supplements containing marine compounds such as kelp, as these ingredients can contain high levels of Iodine. Feeding Iodine over the safe upper level can cause hair loss, lethargy, cold intolerance and hypothermia. It is particularly important to pay attention to Iodine levels with nursing foals.

Iron: Horses have no means of excreting excess Iron so it is very important to watch absorption levels. foals and weanlings are most susceptible to iron toxicity. A safe upper level is 500mg per kg of total diet for mature horses. Double that figure would start to be a toxic level of Iron. Potential problems associated with Iron toxicity are loss of appetite and weight, decreased growth and damage to the liver.

Magnesium: Currently there is no confirmed evidence of a toxic level of Magnesium in horses but in other species the maximum tolerated is around 4000mg per kg of total diet.

Manganese: Manganese is similar to Magnesium where an upper safe level has not been proven. One should still avoid feeding amounts over 1000mf per day of total diet.

Potassium: Excessive Potassium intake seldom results in toxicity since any excess is excreted into the urine as long as adequate water is available; if excessive levels are fed without adequate water the horse could develop HYPP (hyperkalemic periodic paralysis) which can cause cardiac arrest. If your horse has been diagnosed with HYPP low levels of Potassium are critical. The daily requirement for non-HYOPP horses is around 50mg per kg of body weight.

Selenium: Selenium Toxicity is much more prevalent than selenium deficiency. One of the challenges with Selenium is the significant variations in levels in the soil and it is critical to know what the selenium levels are in your area before choosing to feed additional Selenium in a horse supplement. The maximum tolerable level is 2mg per kg of total diet. Problems associated with Selenium toxicity have been recorded when only 5 mg per kg of total diet has been fed. Selenium toxicity results in enlarged liver, kidneys and heart. Additional symptoms are excessive sweating, abdominal pain, colic, diarrhea, blind swaggers and lethargy. Toxic levels will also result in hair loss around the mane and tail, cracked hooves and ultimately blindness and paralysis. What does this add up to BE CAREFUL when feeding multiple horse supplements particularly if you are living in a Selenium rich soil area.

Sodium Chloride: Toxicity from excess salt levels is rare provided the horse has adequate supplies of fresh water. Horses will generally not eat more than they need so it is perfectly safe to provide them with a mineral salt block. If salt toxicity does occur symptoms will include colic, diarrhea, frequent urination, paralysis of the hind limbs and ultimately can cause death.

Sulfur: Any excessive levels of sulfur will generally be excreted in manure and urine. There was a reported case of horses accidentally being fed between 200gm – 400gm of 99% pure sulfur where they became lethargic, had labored breathing and a yellow discharge from the nostrils  and tow out of twelve horses subsequently died.

Amino Acids: There have been no scientific studies conducted on toxic levels of amino acids in horse supplements being fed. We have discussed this issue with 5 different animal science professors, each of whom specialize in equine studies at various veterinary colleges throughout the US and received no further illumination on toxic levels of amino acids in horses. We did hear of studies conducted with swine, cattle and rats and in those cases the levels required to induce a toxic reaction were far above any cumulative levels we could imagine in a normal feeding program.

Once again I reiterate that my purpose is writing about these scenarios associated with toxicity is not aimed at creating fear but to alert you to the possible ramifications of unrestrained feeding of multiple horse supplements on top of nutrients contained in grain and forage. Just stop, count and think before adding another shiny bucket to your collection. It is important to know, beyond the formula and pricing, about the integrity of Grand Meadows.

We are the founding member of the National Animal Supplement Council (www.nasc.cc). As the only Equine supplement manufacturer involved when the NASC was formed, we have been responsible for many of the fundamental changes that have been introduced and that have transformed the industry in recent years.

Our President, Nick Hartog, has served on the Board of Directors of the NASC since its inception.